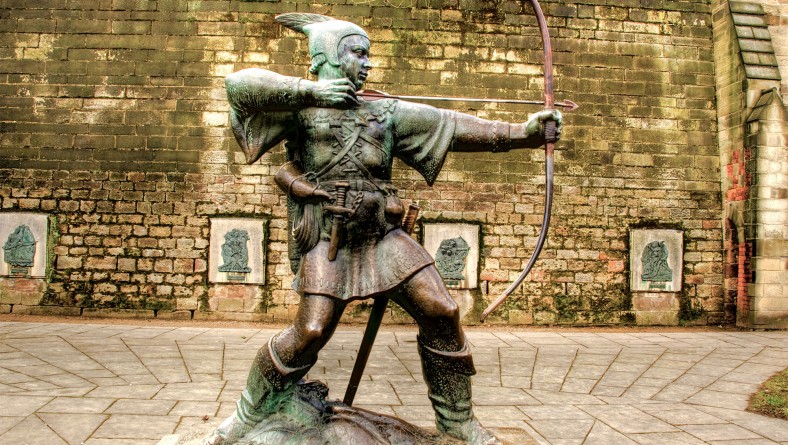 It’s old news that Nottingham has failed to realise its gift of a world famous character. The world has long been incredulous that this opportunity, which could have brought much financial and cultural wealth to Nottingham and to England, has been missed.

Due to past neglect this famous son of Nottingham and symbol of England has become a cartoon character, the caricature of ‘Men in Tights’, and fancy dress costumes and tacky tourist gift shops.

Beyond this is the wider implication. Robin Hood is a symbol of the spirit of the common man standing up against tyranny and injustice. He is a symbol of hope. These are timeless and universal concepts and are why he has resonance throughout the world. Such is the power of these ideas, that Robin Hood has been re-interpreted by different societies, world over, for centuries in literature, art and films etc, as a reflection of that society.

A brilliant example of this can be found in the grinding poverty of early industrial Nottingham. The spirit of the oppressed framework knitters, became personified in ‘Ned Ludd.’ Even though the Luddites distanced themselves from the famous folklore figure in their song General Ludd, Ned Ludd has subsequently come to be seen as the ‘Industrial Robin Hood’.

‘Chant no more your old rhymes about bold Robin Hood,
His feats I but little admire,
I will sing the achievements of General Ludd,
Now the hero of Nottinghamshire.’

So Robin Hood is the ‘Spirit of the Common Man’ personified, fighting the good fight to make the world a better place? A strange thing to take lightly, or to mock, methinks.

Furthermore, in these days of celebrity culture, many of the ‘heroes’ for kids are questionable. The world needs heroes with decent values and surely Robin Hood is a hero fit for the modern day. Seeds of Citizenship and ‘Green Living’ can be planted in young minds through a good re-telling of the legend. These are the concepts that Ezekial Bone has been exploring for the last 4 years on the streets of Nottingham. Through the Robin Hood Town Tour, Ezekial Bone seeks to rally the people to rescue Robin Hood from the mediocrity of the modern day and put him on the pedestal that he deserves – as a figure head of culture and the environment.

And there is more light on the horizon. Two keys developments will be fitting additions to the renaissance that Nottingham is currently going through and will help to consolidate Robin Hood’s role in Notts:

Good news for Sherwood Forest that the RSPB will be building a new £5m Visitor Centre at the Country Park, opening in 2018. Their ethos and proven track record in protecting wildlife and habitats mean this first phase will provide perfect foundations for building into the future.

Nottingham Castle, with the investment of £24m, promises a world class attraction by 2019. The National Centre of Protest and Rebellion will celebrate Nottingham’s role in the national struggle for the right to vote. There will be a Robin Hood Gallery* which will aim to give the C21st century visitor what they are looking for.

As it was in the past so it will be in the future. Robin Hood, famous son of Nottingham will be celebrated on his own turf and on the global stage as a symbol of hope for the twenty-first century. Then, Nottinghamshire and England will feel the benefits that their famous son could have brought years ago.

Robin Hood is a personification of the power of the people and he represents a fairer word for all. In this sense, never has Robin Hood been more relevant in the world than he is today.

*Initially major funding bodies refused to finance someone ‘that didn’t exist’. This is highly ironic, because over centuries people have willed Robin Hood into being – as a champion of a better world. What is not worthy backing about this?

Initial lack of Robin Hood presence at the castle development led to an outcry from the people of Nottingham. This forced change and, as a result, the Robin Hood Gallery will await people there when it throws open its doors to the future. This is, in itself, is a good example of what people can do if they rise up and back a cause with one voice. This is an example of the relevance of Robin Hood today.