Join Robin Hood C21st as he fights to good fight and rallies the people to help restore the landscapes of Sherwood Forest!

At its largest historical boundary Sherwood Forest once stretched from the mighty Nottingham Castle to Retford – almost 25 x 8 miles. Around 20% of Notts was covered by a marvellous mosaic of diverse landscapes and habitats, abundant with life and colour.

For centuries, its exploitation by man has seen it reduced to a fraction of its size. Roughly 1% of original woodland cover is left at the National Nature Reserve (100,000 to 1,000 acres) and there has been over a 90% loss of woodland and heathland across the wider area. We are now in the wonderful new future that man has been building and around us the Royal Hunting Forest, once the ‘playground of princes’, lies in scattered fragments.

What is left is one oldest and most important habitats in Britain. The older a landscape the greater the number of, and the rarer, the species associated with it. Sherwood is a treasure trove of life for our rarest plants and wildlife yet the web of life therein is so fragile, and the oaken heart of England barely beating…

Not only is it important ecologically, Sherwood Forest is central to the story of England, physically, culturally and spiritually. For centuries its oaken timbers built our castles, cathedrals and iconic buildings. The Agricultural Revolution of the C18th saw new farming practices and mechanisation which required bigger fields to feed growing urban populations. From the C18th into the C19th the British Empire was urged on by the most feared Navy in the world and protected by the ‘wooden walls of England’. From the mid C19th onwards, with the advent of deep coal mining, the ‘Black Gold’ was dug up to power the wheels of the Industrial Revolution and the land covered in collieries, mining towns and spoil heaps. In the early C20th, its heathland and grassland was ploughed up with diesel tractors for even larger scale farming and for quick growing fir plantations in the quest for self-sufficiency during the World Wars. Modern urban demands and development has seen the fragmentation continue.

For centuries Sherwood Forest has inspired poets, writers, artists and it is the majestic background to one of the greatest stories ever told. It is a natural wonder and a national treasure. It is at the heart and the soul of our nation.

As a nation we collectively owe Sherwood Forest a debt. It gave the country life as it served the nation. The time has come for us to serve this land and repay our debt before it is too late.

The existing open farmers’ fields, fir plantations and spoil heaps are of limited biodiversity value. Some restoration work has been going since 1980’s by organisations and landowners to reconnect the fragments with grassland strips and wildflower meadows, but there is a bigger role for YOU to be involved in this collective responsibility.

Anywhere where life and colour can thrive, wildlife will survive!

Ezekial Bone is the ‘Official Robin Hood’ of The Sherwood Forest Trust (Heritage Ranger 2005 – 2011) and is spearheading an ambitious new project to restore the land over the wider area. With delivery partners Nottingham Open Spaces Forum, Nottingham City Council and the Nottingham Castle Trust, we will create opportunities for everyone to get involved.

We will rally the people and empower them to help put the green pieces of the mosaic back. We will plant a spiral* of talismanic oak trees from Nottingham Castle, the heart of Nottingham, to the Major Oak, expanding the green footprint of our City, creating spaces where life and colour will thrive and wildlife will survive

Obviously, it won’t be possible to plant acorns everywhere due to their later size and longevity. It has to be the right tree in the right place. Here the acorn is symbolic of this endeavour and represents any native greenery that can be planted to breathe life into the land. It is the symbol of hard work and achievement after all. (‘From small acorns, mighty oaks grow’: this phrase is an echo of a relationship with the land that has been lost.)

Work can take place in the Arboretums, green parks and spaces in your neighbourhood, but planning and consent is required for this and can be gained through Nottingham Open Spaces Forum. It also includes allotments, edible playgrounds in schools and literally on your own doorstep in back gardens and window boxes. We will encourage and empower everyone to interact with the earth and help to restore people’s relationship with the natural world, for this land is our home and its future is in our hands.

*Why a spiral? The spiral is common in nature. Primal and raw, it is a symbol of growth, evolution, and progression. It represents the cyclical forces of nature and seasonal patterns. It symbolises female energy, fertility and the womb. Through such work we can start healing the land and start restoring our relationship with Mother Nature lost by an industrial, patriarchal society.

Grassroots work for the common wealth!

How to get involved:

If you are part of club, organisation or community group and would like to help us to plant more trees in Nottingham and become part of The People’s Forest, get in touch at peoplesforest@nosf.org.uk

Any donations, no matter how large or small, are welcome at our Just Giving page: 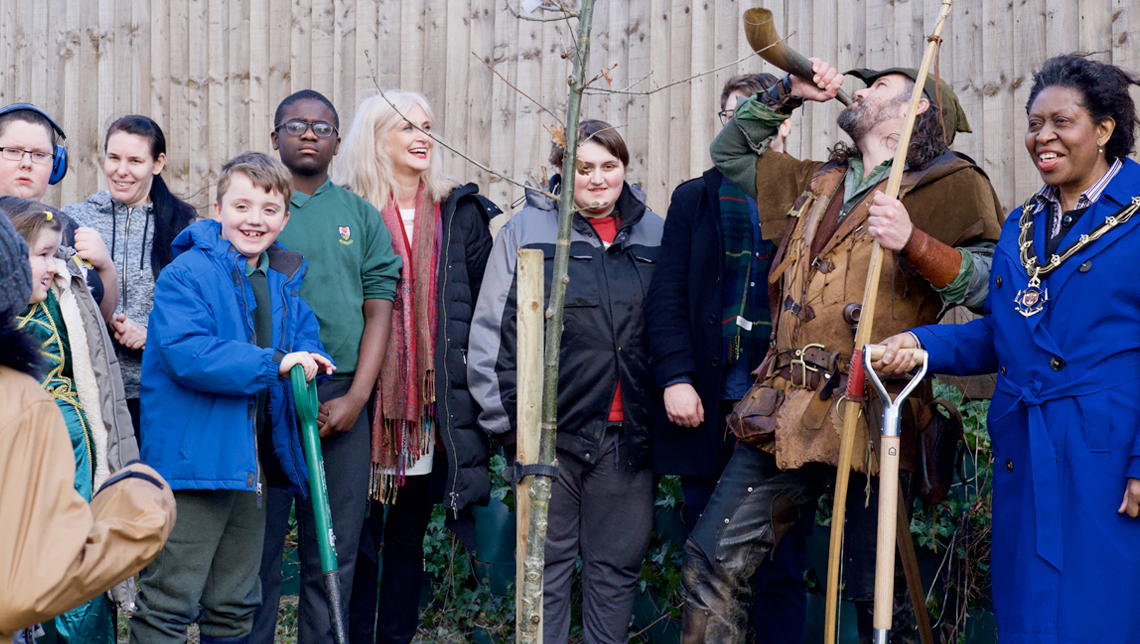 Great news! The first of 80 People’s Forest Oak Trees, kindly gifted by the Nottingham Castle Trust was planted at Rosehill School on 25.02.20.

Many thanks! All Primary schools and Special schools within the Nottingham City boundaries are to be gifted a People’s Forest Oak Tree as part of the exciting new Nottingham Castle development.